It was a dark and stormy evening for this opening party at Duncan McClellan Glass. Very windy, black skies, and stinging rain. A hardy bunch of gallery-goers braved the weather and attended the opening. 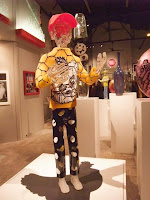 On the left is "Which came first?" by Rick Schneider and Nikki Vahle, a blown glass figure standing on an outline of a chicken. The figure is dressed in loud street garb. Note the egg print on the pants. On the shirt is chicken wire, and chickens. 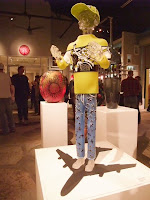 To the right is "Eye in the Sky", by the artists above. A similar figure, hands outstretched, this time standing, with small plane print on the pants and an aerial view of an airport on the front of the shirt.

Several pieces by Duncan McClellan. The reddish one on the right side of the picture is "Communication". 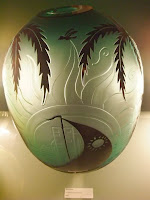 The silver and blue piece next to it was for the Mainsail Art Show.

The number of artists at the DM gallery is noticeably increasing, with many works from past shows remaining.  The bazaar feel is becoming stronger. I hear he's bringing in a well-known curator soon.

I had the pleasure of running into Ernesto Piloto-Marquez at this party and talking with him about art. From that spirited conversation, it occurred to me that some day Duncan, who has enough room, should organize an artist's symposium and have several give a series of small talks at the gallery. Just a thought.


These eye-candy cubes made from optical glass by Jack Storms were stand-outs in the gallery. He also had a lathe-turned glass bottle that was exquisite. 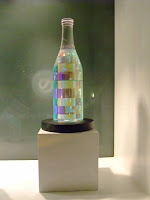 Jack's agent told me he had to modify a lathe for using it with glass. 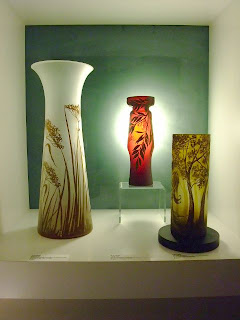 
The work on the left is a gorgeous object that plays with light, varying with every degree you move. 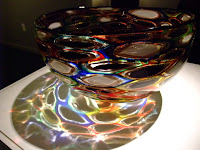 This blown glass bowl by Massimiliano Schiavon, made with filigrana cane diamond-carved was pure unbridled color. 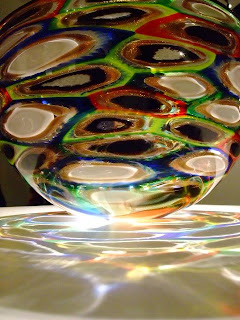 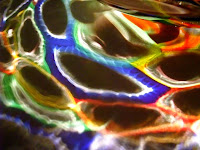 Hypnotic color. The only negative to this work is that it will eclipse everything else in the room. 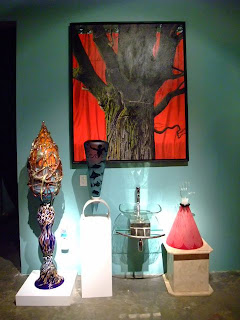 Congratulations to Duncan McClellan and all his people for putting together another first-rate art event (these aren't just gallery openings) open to the public.