The Flamingo is easy to miss in spite of the glowing red roadside sign. On October 21, 42 years ago, Jack Kerouac passed away. Supposedly, it was at the Flamingo that he had his last drink at a bar. I have made pilgrimages to other Kerouac sites. His last dwelling, a nondescript house at 5169 10th Ave N. St Pete. I followed part of his route cross-country when he went with Robert Frank. On one of my trips to San Francisco I seached out and found the small red house where he lived with Neal Cassady and his wife. It is best seen from the alley. I also went to the other Beat places, Vesuvius, City Lights, etc. Thus I found myself with a friend at the Flamingo on Ninth Street (MLK), at 1230.


The place is dimly lit, wood-paneled, with two billiard tables parallel with the back wall, a longitudinal U-shaped bar, a front room with another billiard table, and some tables to sit at, then the front patio, where the concert was held. It is easy to imagine The Flamingo looking similar to the way it looked 42 years ago. It was a cool evening. Every seat in the patio was taken, and there were seats on the sidewalk, and a solid line of people standing on the grass between that and the road, stretching the length of the property. A few stragglers and poets stood around the neighboring bar's parking lot.

The concert featured Ronny Elliott, Grove Scrivenor, Valerie Wisecracker, Rebecca Pulley, Dog Peter Pat, The Spark Notes, and Wendy Barmore on the line-up. It was first-rate and in an intimate plein-air venue. 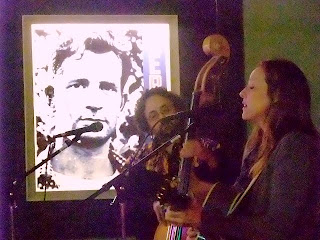 On the left is Rebecca Pulley and one of the Reluctant Prophets playing. That's a backlit picture of Jack Kerouac on the left, on a window at the Flamingo. The sense of emotional urgency in Rebecca's voice is something to hear. [Link]
[Link] 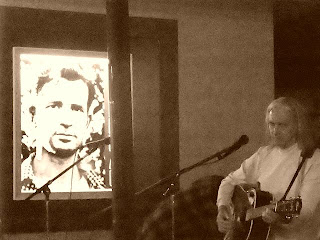 On the right is Ronny Elliott, who knew Jack Kerouac. He played beautifully, including his "Burn burn burn" song [Link], and a mournful, angry and sad song about Kerouac's last days. [Link]. Elliott has been described as a cult artist, and it's easy to see how a cult following could arise around his performances. 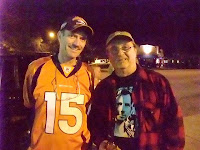 On the left is poet Johaniter Aurora, who read a few of his poems onstage (I was up there with him, holding a flashlight so he could see). On the right is the organizer of the event. 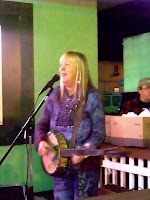 On the right is Folk Singer/Acoustic musician Valerie C. Wisecracker, who played and sang beautifully. [Link]. 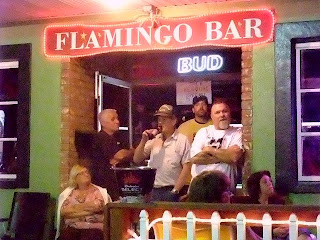 Flamingo Bar, main entrance and patrons. I ran into Joe Walles, photographer and photo-editor for The Saint Petersburg Times, and Rebecca Skelton. One of the highlights of the evening was getting to watch Joe, a veteran photo-journalist and street photographer, at work.

Jack Kerouac said that St. Pete was a good place to come to die. Reportedly, he enjoyed his anonymity while he was alive. In death, he is anything but anonymous. Congratulations to the musicians, organizers and the Flamingo Sports Bar for keeping his memory alive.