The Cuban Sandwich Show (the actual show at HCC Ybor) is the core of the cultural event festival bearing the same name.It was originated by Gordon and Denise Myhre in 1991. David Audet was in that first show, and eventually he held it in various locations until 2002. A nine-year dormancy followed, with a passionate and triumphant rebirth in 2011 that was extensively covered here. The   following artists are in the show (from looking at my pictures of the tags). In no particular order: Dee Hood, David Audet, James E. Tokley Sr., John Costin, Bonnie Bowman, Laszlo Horvath, Joanne Parkay, Melissa Fair, Linda Liechti,Nancy Yasecko, Jeff Fey, Linda Dawson, Steven S. Gregory, Mic Knight, Barbara Kazanis, Mark Falls, Stuart Kincade, Elizabeth Mitchell, Chris Peattie, Marlene Glickman, Carolyn Kossar, Yoko Nogami, Sarah Butz, Pete Orajirena, and Annie Wade. [If I've missed anyone, please e-mail me and I'll add the name.] Too many artists for me to review, so here are a few selections... 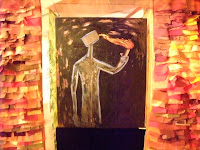 Entering the HCC Ybor gallery's door, one faces a second, somewhat yonic, secondary entrance to the show, a mixed media piece by...


...Marlene Glickman that also works as a secondary frame for a large painting behind it by Dee Hood titled "Torchbearer". Note the torch is a lit Cuban Sandwich. 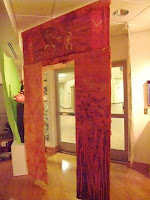 Here is a view of the rear of the gate by Glickman. This layering, partitioning and redefining of the gallery space is consistent throughout the show.


Just to the right of the entrance is a mixed-media assemblage work by Chris Peattie, who died a little over a year ago, titled "Suck".  A doll/statuette of GWB in a cowboy outfit astride a small vacuum cleaner canister (labeled the "presidency") that seems to be shredding dollar bills. In front, an outsized pair of horns. The pose is somewhat reminiscent of Major King Kong riding the bomb in Dr. Strangelove. This work is like a guardian at the gate of this show. 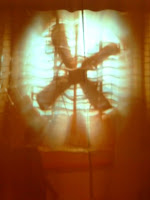 Once inside, the space is a series of soft-walled (curtained) paradizzos, with Laszlo Horvath's "Fannatix" whirling silently overhead, a digital film of a large ventilation fan at WTCA projected on a translucent curtain. Cycles with a touch of noir hypnotically keeping time like a clock sweeping the past out behind it. Laszlo also has several exquisite prints of fans in the show, as well as a large montage including a self-portrait.


On the left, Joanna Karpay's oil painting "The Rooster Prince" depicts one of the symbols of the city as radiating potency, life, individuality and freedom. On the right is another work by Ms. Karpay, an installation comprised of a digital projection of interesting photographs onto a (wire) screen on a floating hung-from-the-ceiling screen door. Unfortunately, this tended to get lost because of the light tones in the work behind it. I would love to see this with a darker background.

Steven S. Gregory had a few of his carefully composed and processed photographs in the show. This "Through the Looking Glass Series" consisted of mixed media photo montages with a large main architectural image at the base of the frame, and a trio of smaller images across the top. These are architecturals with emphasis on cultural context. In the work at left, "East Tampa", we see the alley between The Roosevelt and Czar in Ybor City looking West. It looks very different now because the wall on the right side has several new graffiti pieces on it. In the triptych at the top we see a gangster-type figure, one of those palm leaf crosses people make and sell on the sidewalks of Ybor, and a classic section of wrought-iron, perhaps from a gate or window. It is framed in what appears to be an old window. 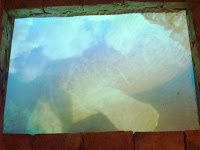 "We're More Native Than You'll Ever Be", a digital installation by Stuart Kincade consisting of a suspended projector throwing a video down onto a brick-framed, well or pool-like enclosure. Florida is rich with the history of waves of people washing ashore and claiming nativity. Kincade reminds us that Nature preceded all of us. The frame shown is of a manatee with its head at the lower left of the image. 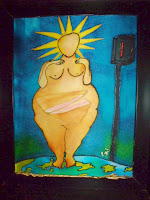 Elizabeth Mitchell showed "The Goddess", a golden figure in the form of one of the many steatopygic Venus statuettes from the upper Paleolithic period. This one sports a star crown, like the Statue of Liberty, and she has one second to cross the strait. Look in her ample belly, and there rests a Cuban Sandwich. Look at her feet. They are grounded in Cuba, home of the
sandwich. This silk painting is light-hearted and figuratively complex simultaneously. 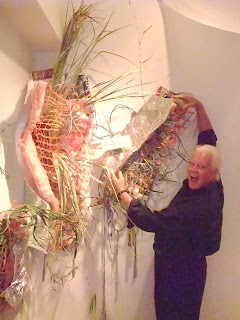 The trio of sculptural forms on the right, with their sculptor, Mic Knight, who uses discarded consumer goods to represent a near-abstraction of three Cuban Sandwiches. Mic is a videographer and artist. [Link]. 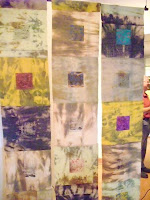 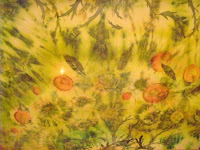 There are many beautiful fabric pieces in this show. On the left is "Grill Marks", by Sarah Butz. On the right is "The Backyard Sour Orange Tree", by Bonnie Bowman.