The King Corona Cafe in Ybor City, owned by Don Barco, accurately bills itself as an "oasis". A great place to sit and have an excellent Cafe con Leche or other coffees, beer or wine, along with tasty food, buy and smoke a cigar, buy a guayabera and most of all, to meet genuine, interesting people.


The fifth Cuban Sandwich Show (CSS) event was titled "Chusmeria". in Cuba, the chusmas were the great unwashed and largely undereducated masses. Their slang and its contents were referred to as Chusmeria, with the letter "s" in the middle being abbreviated so as to be barely audible. 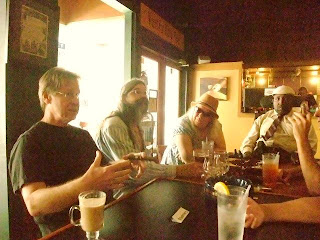 About ten people met at the cafe, sitting by the picture window. The group's membership varied throughout the afternoon as people came and went. In the picture at left. (l. to r.) Don Barco, Donnie, Diane Ruthie and Arizona. The format for this event, which should be held more often than once a year, is a salon, where a wide variety of topics are discussed, some quickly, others in more depth. All in a collegial, friendly spirit. 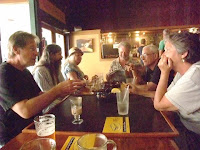 A few of the topics touched on were: What will the Republican Convention bring to Ybor businesses and the Tampa area? The efficient handling of a potentially dangerous incident at the Ritz...What will Guavaween be like sans the Mama Guava Stumble? The new kinder/gentler TPD uniforms for the RNC Convention... the history of Jews in the South...Sephardic Jewish customs...Mandela's Long Walk to Freedom book....the history of hip and several other fascinating topics. Conversations spontaneously splintered on the side between participants. It was a great afternoon, the hours flew and suddenly, we said our good-byes and left into the afternoon heat on Seventh Avenue.