Animal Based Charities (ABC), is a nonprofit organization that serves about 50 pet rescue groups in the Tampa Bay area. They recently opened a thrift shop in Seminole Heights. For more, see here: [Link]. Absolut sponsored this fundraiser at Gaspar's Grotto in Ybor for ABC, as part of the Cuban Sandwich Show (CSS). The admission fee went to help ABC do its mission. 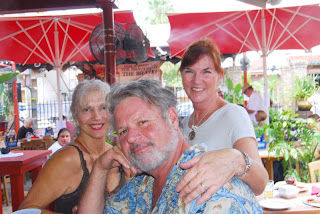 I got there and joined Francine, CSS organizer, David Audet and Artist Joanna Karpay, brainstorming at the bar.


Gaspar's Grotto was packed with dogs and their owners. Here are a few...

On the left are Zoee and Aaron.

On the right, Barbara and Dappa.

On the left is Sharon with her two dachshunds, Daisy Duke and Donnie.

On the right is Cathy kissing a friend... 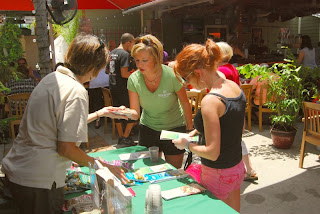 The rescue organizations disseminated helpful information during the afternoon.

On the left are Alexis and her beautiful black lab-pit mix, Luther. On the right are (l. to r.) Rachel and Daizy, and Kimberly and Lola in matching outfits.

On left, are Richard and Harley, wearing a helmet. On the  right are Lisa and Tazitiara, who is a model, and has her own site: [Link]. 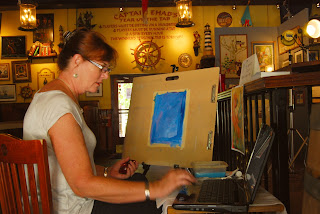 By now readers are wondering: Whatever happened to art? There was a show inside the indoor bar at Gaspar's Grotto, where Joanna Karpay was painting people's pets. Here she is preparing...[Link]. 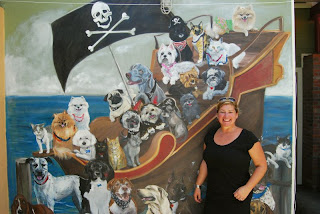 There was also a mural painted by Anna Hamilton painted on the east wall of the bar of a multitude of pets (including Tazitiara, seen at the upper right) aboard the SS Gaspar. Here is a photo of the mural and Ms. Hamilton. [Link]. Ms. Hamilton has painted large, serial, ongoing murals of pets in St. Petersburg and Clearwater.


I want to thank all the pets and their owners, the artists, Animal Based Charities, Absolut Art, Gaspar's Grotto, David Audet and the Cuban Sandwich Show for an excellent afternoon and for reminding us that the love between pets and their humans makes both better.