Sitting on the steps of the Sam Rampello School in a faint drizzle. The wind picked up, and light rain followed. Behind, in the courtyard of the school, scores of police are amassing. On the way to the school, I noted there were others hiding in the walled-in block of the downtown power station. A young couple is under the eave at the school, monitoring the progress of the parade on Tweeter via iPad. Great pictures are coming in, of people getting media attention while giving speeches. Strangely, the crowd in the pictures seem too small. Maybe it's the lack of wide-angle lenses for iPhones. Rain diminishes, then stops. We are told the route is different from that published on the Tampa website (?) and we move. It is still drizzling, and spectators line up on the sidewalk below awnings. 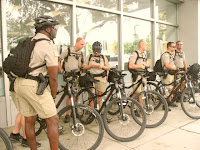 There are astonishing amounts of police everywhere one looks, on foot, bicycles, in the back of pick-up trucks, golf carts, etc. Policemen act confident, if not somewhat bored, yet very friendly.  New khaki uniforms do make them look more benign, but they still look like an occupation army. MRAPs, armored vehicles of the same kind used in Iraq, can be seen. Courthouse buildings are guarded by troops carrying M-16 rifles behind eight-foot tall steel mesh barriers. Would they have machine-gunned people down if they had perceived a threat to the building?


The official, predicted numbers of protesters shifted over time. It started with a few thousand, and ended  up at fifteen thousand. Ominous sounding names like "Anarchists" and "Black Bloc" were bandied about so often that South Tampa residents living miles from the Convention area were terrorized, with mental images of bandanna-masked hordes crossing the Hillsborough/Rubicon and wreaking havoc through places like Hyde Park and Bayshore Gardens. The perhaps coincidental result was to lower resistance to the militarization of downtown Tampa. It was the old "if we fight them there, we won't have to fight them here.". At best, this proved to be mass paranoia. The effect was for residents to unquestioningly line up behind the Mayor and TPD's plans. 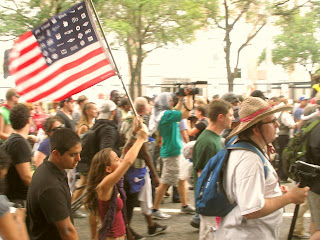 Blocks away, a fluttering, thin, fuzzy line of protesters materialized behind the usual motorcycle cop procession, sirens wailing. The crowd is energized, singing slogans, carrying banners for different causes. This was the Coalition March on the RNC, a conglomerate of various groups as an opening salvo of protest on the first day of the RNC Convention. Although spread out, it is obvious police outnumber protesters, apparently at around 2:1, maybe more. Have protesters separated along the parade route? 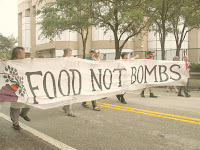 No. Police estimates initially put this march at 400-500 in number, but it was closer to 300 according to later estimates. They march on, turn and file in to the designated protest area, supposedly, according to the law, in sight and earshot of the Convention Center. It isn't. They may as well be in Arizona. The rocky empty lot is a favorite of homeless men, precisely because it is out of sight. 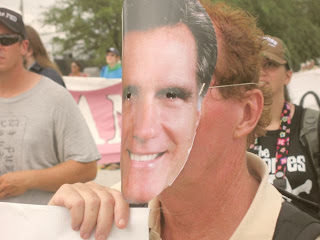 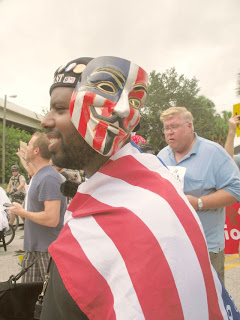 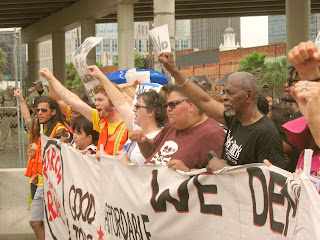 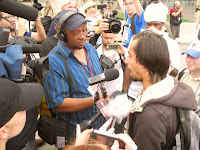 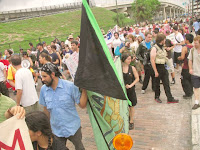 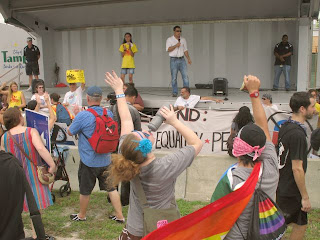 "We will not be caged!", became the chant of the protesters, many of whom seemed nervous. at the thought of being herded into a trap-like space. On a small stage, speakers talked about various issues.


Spontaneously, about 100+ marchers began going back on the parade route. Police lines formed in front of  and behind them, but no efforts were made to stop the flow. As they paralleled the Fort Brooke parking garage, a few dozen broke in a run perpendicular to the street, reportedly trying to get at the water provided by the Salvation Army.. Police reacted smoothly, racing in on their bikes, forming a barrier between the black-clad leading protesters and Florida Avenue. A few words were exchanged, and the breakout ended peacefully. The water was allowed. The crowd dispersed.


This was the largest single demonstration of the Convention. Assume half of them slept late and didn't show. Where were the other 14,000 protesters predicted? Police blamed it on the fifteen to thirty, depending on who you spoke with, buses that cancelled when hurricane Isaac was forecast to hit the area a couple of days ago. The math doesn't add up. Let us take the higher number, thirty buses. At full capacity, they can transport 110 passengers each. Times thirty, that would account for 3,300 missing protesters, still leaving 11,700 unaccounted for.

How could TPD/DHS/FBI?SS intelligence overestimate the numbers by four-plus, (if not ten) times? Mayor Buckhorn already patted himself on the back by saying that this Convention -- and the decisions he and other officials made -- will be held up as an ideal in the future. A group of lawyers naively or kindly called it "a waste of resources".


Something does not add up. Authorities are pleased with the lack of arrests (3) and general peaceful mature of the protests, but the intelligence was at best, deeply flawed. Fifty million taxpayer dollars spent on an oppressive amount of police and gear that enriched police contractors based on these estimates at the expense of Tampa's image.
Posted by Luis at 7:42 AM