Famous American inventor Dr. Edwin Land invented the Polaroid film and camera, released in 1947. The film developed as it was pulled through rollers in the camera. Afterwards, a coating had to be applied to the prints. It was messy and toxic. Land's camera/film became a hit. Remember, back then there were no 1-hr photo labs. Instant prints, albeit small, were a revolution. In 1972, the film became totally self-contained. The SX-70 camera was introduced. It was an ingenious design, an elegant SLR that folded flat to fit in a purse or coat pocket. There were several models of this camera, including latter versions in autofocus ( I still have two). Popular with the public, they also found their way into artistic circles.
Walker Evans, who once said color was "vulgar" used them and did a book from those images. Lucas Samaras used them for many legendary self-portraits, David Hockney employed them to make some of his most famous "joiners", and many others.

As a Polaroid brochure claimed: "The virtual cascade of revolutions, mechanical, optical and electronic, that made the SX-70 possible,” rhapsodized a Polaroid brochure, “had only one purpose: to free you from everything cumbersome and tedious about picture-taking, so that it could become at last the simple creative act it should be.”

On the surface, all this automation created a level playing field reducing user input to seeing. In reality, the film had an extraordinary quality to development that allowed users to manipulate incompletely developed film with tools like a stylus to "mush" the emulsion. This could be subtle, softening of edges, to nearly liquified sections of the print, where elements could be moved, reshaped or mixed. Here are some resources [Link]. The company had been plagued by debt since 1988, and on October 2001, it filed for bankruptcy. In 2008, ten dedicated Polaroid employees saved one film factory, and by 2010, had begun to produce and sell film. This was called the Impossible Project, and it is still ongoing. 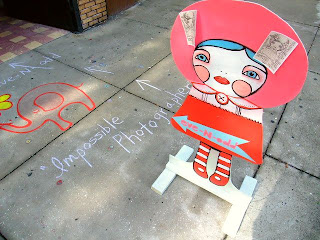 Michael and Cherry Collins are photographers who specialize in analog photography and things like toy cameras. When I met them at Jennifer Kosharek's The Impossible Photographers @ Eve N Odd Gallery, they were wearing old plastic cameras. A young couple with an admirable love for traditional processes, vintage cameras and their inherent visual properties, they have been working with the Impossible Project film, which is showcased in this exhibit.

There are thirty SX-70 prints from each of the artists, on a black background, which helps the colors stand out. Many viewers were taken with the work, asking about prices, but none of the prints are for sale. Very Zen.

On the left is Cherry Collins' "Inferiority Complex". Three efflorescences, the two taller ones curved because of their own weight, photo-tropism, wind, or a combination thereof. The pastels that Polaroid is capable of shine in this photograph. Note the critical placement of the cloud in the background, which serves to accentuate the cirvature of the stems. Along the lower edge of the frame, there are three leaves, echoing the triad of flowers.

"1/2", by Michael Collins is a photograph of a portion of a street art piece that used to be on Tampa Street, which I also photographed (whole, for illustrative purposes) and published here. Michael pulled in close. The "blindfold" on Tricky Dicky says "Liars". The UV induced blues of Polaroid are evident here.


It was a pleasure to meet the Collinses and talk with them at length about their work. They're putting together a darkroom and will be exploring old processes among other things. Two people steeped in the medium of photography, recontextualizing the imagery into the present. I want to congratulate the artists for a good show of this nearly lost process put to good use artistically, and Jennifer Kosharek for putting it together and showing it at Eve N Odd.


The Impossible Photographers @ Eve N Odd Gallery -  When Polaroid went under, devotees of the SX-70 type film mobilized and managed to resurrect the film. It was appropriately dubbed  "The Impossible Project", and they pulled it off. Michael and Cherry Collins are photographers who seized this unique opportunity to work with the film. Their efforts will be shown @ Jenifer Kosharek's Eve N Odd gallery, opening on Friday, August 10th, from 5-8 PM. Runs through August 31. Eve N Odd Gallery, 645 Central Avenue (in the Crislip Arcade) St. Petersburg. Free admission.
Posted by Luis at 11:31 AM