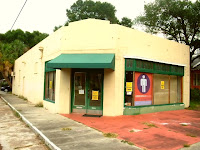 
Inside, the Giant Chicken Mascot of the CSS lorded over the proceedings. On the table, a feast of pastries prepared by Ruthie Diane beckoned. In the interests of accurate blogging, I tried one of everything and can report they were exquisite.

Gordon Myhre's film short, "Artie Infinger, A Portrait" was shown.  Made in 1997, the film follows a man who appears to be paranoid to the extent of wearing aluminum foil on his head below his hat, and like a corset around his waist. Artie, who has quite a limp, walks from Tampa Heights, through downtown Tampa, where he puts money in others' meters (now illegal, btw). A funeral procession goes by on Florida, a lengthy one with several limos. Artie eats at the old Question Mark Sandwich shop that used to be next to the Zack street newsstand, then makes his way down Bayshore, to Ballast Point, where he comments before the Jules Verne sign (Verne landed there, and spent his few days here in a whorehouse around where Badcock furniture used to be on Franklin Street making notes for his book(s).  Then Artie hops in a cab, leaving the documentary crew behind and beats it back to his apartment. The thing is that this is a film in the documentary style, much like Walker Evans' FSA photographs. It's not real. Artie was acted out by Jim Rayfield, who really had that limp.

Richard Jay's poem about commuting in Tampa struck a very familiar note with the audience. Rhonda Nelson, an award-winning poet, Florida Fellow in Poetry, and musician, read a poem inspired by one of Tampa photographer and educator Maida Millan's photographs. Her second poem was about mourning. [Link]

A bike shop might seem an unlikely subject for a poem, but Sarah Myhre delivered a beautiful reading about her brother's bike shop. Sarah's second poem was about her father, Gordon. Renowned and award-winning poet Sylvia Curbelo read a poem titled "Gail Christie", and a second "The Last time I Saw Alice". [Link], [Link]


Author Lisa Birnbaum read from her novel titled "Immigrant Stripper". It went a little long, but it was well worth it. She is an associate professor at UT. [Link]. Don Morrill, a professor at UT, author of four books and much more, brought a poem titled "Each Day as I Drive Home", and another, inspired by a 17th century poem. [Link].


Gianna Russo is the recipient of several fellowships, has taught creative writing for two decades, publishes Yellow Jacket Press and much more. See here: [Link]. She read an incredibly expressive and emotionally brilliant poem about a parade and the Daughters of the Confederacy float.


Cole Bellamy, whom I have seen read at Cafe Hey many times, read his mythic "Alligator". He is a professor of English at St. Leo University at Mc Dill Center. [Link].  James E. Tokley, acclaimed poet, Poet Laureate for the City of Tampa and much, much more, read a poem titled "An Anachronism at Oluftee, Florida", about his experiences at a Civil War battle re-enactment there. Then he read "The Survivor", a haunting, beautiful poem about two individuals and the Holocaust. [Link]


Congratulations to all the poets, Grown Man Studios for hosting and David Audet for  a delightful evening, the kind that reminds us of what it means to be human and living in this time and place.

A couple of bonus pictures...