Post! Was a politically themed show aimed at RNC Convention insiders, leaders and media. Most political art tends to be towards the monosemic and sententious ends of art. Propagandist, if you will. In this genre, this is not so much a shortcoming  as it is a rich tradition. Cafe Hey and the role it played during the convention has been detailed here [Link]. There were over 60 works shown. Here are a few highlights....

"Those who can make you believe absurdities can make you commit atrocities", by Alicia Everett, consisted of rows of sheep, with the title/quote from Voltaire in the middle of the upper third. Follow the rows of sheep down to the lower right, and the sheep are seen entering a slaughterhouse. Behind it, a small puddle of blood is visible. 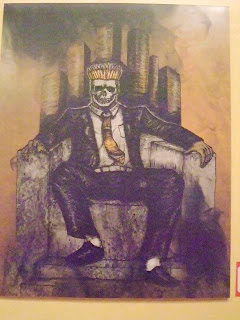 There were international entries in this show. Victor Marques Lins sent this in from Sao Bernardo do Campos, Brazil, titled "Hail to The King". A suited death's head figure wearing a suit sits on a throne. Behind him, smokestacks blacken the sky. The skull of the figure is missing its crown. A close look reveals instead of brains, it is a pencil holder. A commentary on one of the core histories of our time: Global corporate dominance. Note the claw-like right hand of the figure and its psycho-grin. 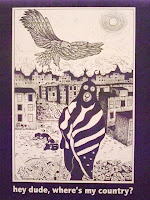 Angela Mark, from Boston, MA sent in "Hey Dude Where's My Country". A flag-draped figure wanders in a wasteland. In its hand is a tiny peace flag. The eagle overhead appears to be swooping in to attack, its talons extended. Like many others in the show, this work is saying that we're in a post-apocalyptic era. 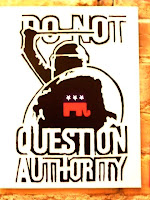 "Do not Question Authority", by Antifa Klein Pankow, shows the ultimate extension of political power: Violence. In this case, the trickling down of violence to the citizen on the street. An ominous, shield and baton wielding helmeted riot cop is about to strike. On the shield is the RNC symbol. Luckily, this did not come to pass. 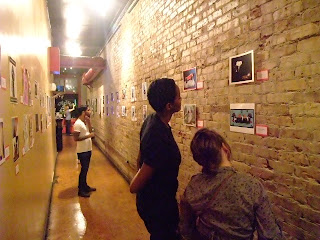 Congratulations to all the artists and to Cafe Hey for a strong and topical show with perfect timing --- and location.