RNC Diary, Part Seven: The Elephant in The Room I


"Joe Griffith is a genius, and you can quote me on that" 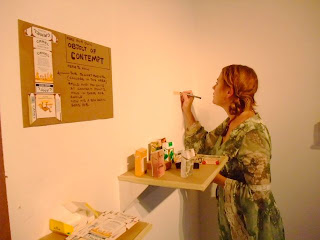 The first part of this review took place at Tempus Projects. As the RNC Convention approached, Joe Griffith and Experimental Skeleton put together a collaborative collage not so much about direct political imagery, but as it turned out, about the mindset as the convention and Isaac neared. 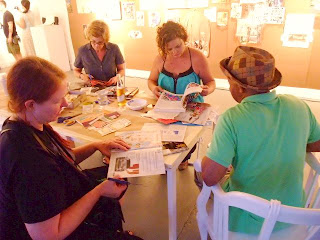 There was a large table with gallon jugs full of glue, stacks of magazines, many scissors and more in the center of the room. Both collaging stations were busy and surrounded by thousands of bits of paper. One time at the table sat Katherine Gibson, Director of Gallery 221 @ HCC Dale Mabry, and Mishou Sanchez, artist and architect, each working on their own addition to the collage, which was put on large 2.5m tall boards. This made them portable and facilitate the second part of this story. Sanchez, ever the designer, made a an unusual 3-D sculptural addition, which she took outside and singed with the flame of a lighter. 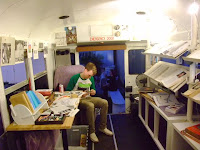 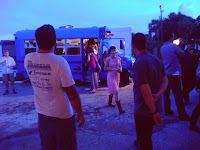 A second, smaller table was set up in the back of Mitzi Gordon's Bluebird Bus, at left. The bus looked happy to be at the blue hour, just past the afterglow into the evening (r.). 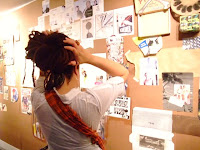 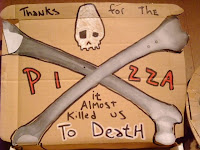 Joe Griffith told me the project was titled the Silverfish Revolution, a means of doing away with their large collection of art magazines and recombining them into a conceptual image of the group. The collage was to also be a time capsule. It had been "seeded" with sixty works of artists invited to contribute. 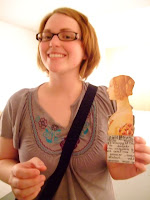 Giancarlo Endina provided DIY cigarrette-sized boxes in which people put in collaged images of things they found negative. They formed a small forest of objects on two shelves, as seen on the right. The girl on the left shows her work, in which she placed a renaissance cut-out. She said she had a love/hate affair with the period in art history. 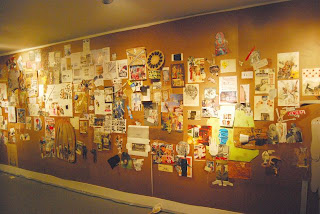 Perhaps due to the RNC Convention, the engaging nature of the collaging process, or making art collectively, this was one of the most successful participatory art events I've seen in this area.
Congratulations to all participants, Joe Grifith, Tracy Midulla Reller, and Mitzi Gordon for a wonderful show & happening. 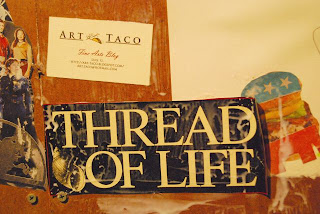