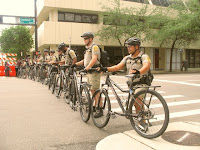 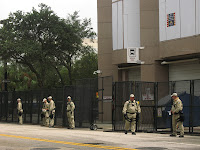 Tampa looked like a post-apocalyptic outdoor metropolitan prison. Headlined as the Convention City Without Walls, it had so many fences that it looked like the chutes around a slaughterhouse. With four thousand police, usually in groups of six to 24+, the feeling, in spite of the Reno-911 khaki uniforms, was that of occupation. 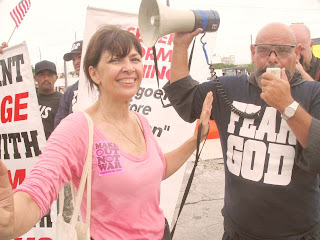 Two stages of security prevailed: That provided for the few citizens that ventured into their city, and a much higher level for those credentialed for the RNC Convention Center. Was it really necessary for guards at the courthouses and Tampa Prep to openly carry and display M-16s while they stood behind eight foot tall steel fences? 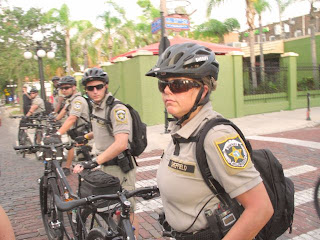 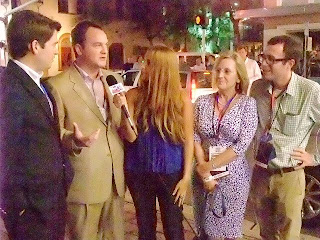 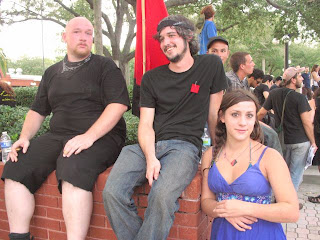 To my amazement, planners neglected to provide any form of free public entertainment for people walking around. I understand that businessmen wanted to cash out without competition, and that intimidating the citizenry into staying away from their City or being present in minimal numbers facilitated security, but Tampa squandered a great chance to display its cultural assets in front of the scores of reporters walking around the Ghost City looking almost as bored as the police, walking around aimlessly. 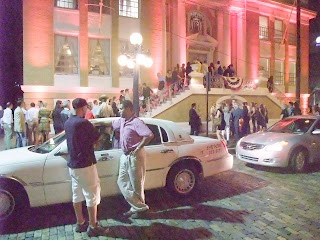 As a result, a particularly venomous small group of less than ten pseudo-Christians who did their best to deliberately incite violence and gleefully insult their hosts commanded a large and undeserved amount of media attention -- every day. We should have presented a festive and happy face not an oppressively defensive one. 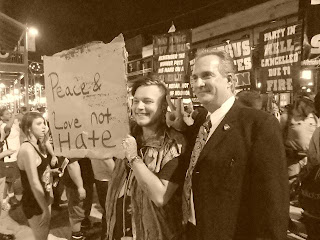 A corporate and privatized version of who we are may have been made apparent to those with RNC credentials in VIP venues, but was held back/hidden/suppressed from everyone else, presumably out of fear. As City Councilwoman Yvonne Yolie Chapin remarked before all this began, all visiting Tampa are our guests. We failed to remember that the protesters also had enough disposable income to travel here, and unlike most RNC members, a younger demographic. In other words, potential future tourists and businessmen whom we would also like to have attracted.  A wasted opportunity. 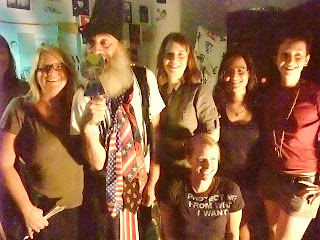 I have already written about the conspicuous incongruity between the projected numbers of protesters and the actual number. Where did this misinformation come from? In my research, a lot of it and the rumors that protesters would either blow up bridges crossing the Bay, or plant IEDs on them can be traced directly to two "private investigators" of the far right. Thinly disguised rabble-rousers who appear to be taken seriously by TPD/DHS/etc. Even taking into account the "missing buses" due to Isaac, that still left an error of 12,000 overestimated protesters. Since this figure was instrumental in enriching police supply contractors and the needless militarization of the City it should be investigated. 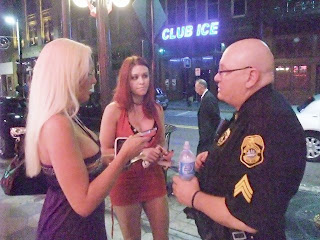 This is the extent of my criticisms, and I understand that many are arguable or perhaps explainable. Unexpectedly, my experiences in the periphery of the RNC Convention were largely positive and uplifting. 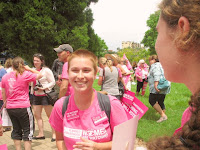 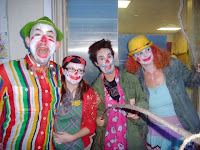 Police were, with one exception, friendly, considerate, humane and understanding to protesters and citizen bystanders alike. They threaded the thin line between maintaining an aura of authority and being humane, reasonable etc. public servants beautifully. Projecting these palpably genuine feelings made a big difference. Order is primarily a consensual social illusion. It can be forced or threatened, but is best  shared. The trust police extended to the protesters was returned. If there is one law enforcement lesson to be learned from this convention, I think this is it. 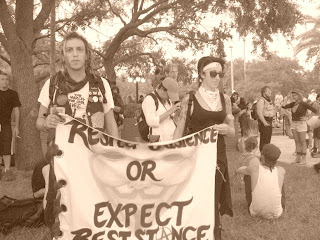 I met several Republicans meandering around downtown and in Ybor City. They weren't bigwigs, just delegates from various states. Unlike what we saw on TV from inside the RNC Convention Center, they were normal, down-to-earth real people with whom I had delightful albeit brief exchanges. They all told me they were enjoying the City, and that it was a beautiful place. Several citizens and I made it a point to offer help with directions or things to do, and to thank them for coming here. 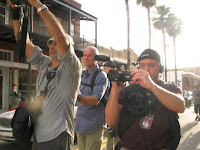 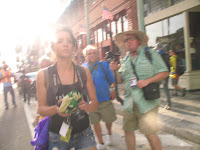 After hearing about the dreaded Black Bloc and Anarchist protesters, I made it a point to seek them out and talk with many of them. Not one uttered even a hint of violence. They seemed less angry than most of the speakers on the podium across the checkpoints. Well-mannered, intelligent, and concerned with the present and future of the country, they spoke clearly and articulately about what they thought was wrong with the country and what could be done towards a better future. Often looked at as seditious rabble and demonized, they came across as friendly, patriotic citizens engaged with the process in their own way. Patriotic, to be precise. Many are very worried (as are countless Republicans) about the future. I remember a conversation with five anarchists outside Cafe Hey. They had varying opinions and views, but one young woman from Hartford, Connecticut said to me that at the core of anarchism is: "To govern yourself", to take responsibility for your ideas and actions. I leaned back in my chair, thinking of the irony that most of the credentialed under the RNC Big Top would have agreed with this.

[Those Anarchists were very interested in experiencing the romantic idea of a "real Florida beach", BTW]

In closing, at the end of these RNC Convention days, I was surprised to find myself with a newly strengthened faith in humanity and the future of this country. Everyone behaved themselves, Police, RNC people, and protesters. All were decent, lovely, wonderful people, and for this kind of event, this may be as good as it gets. 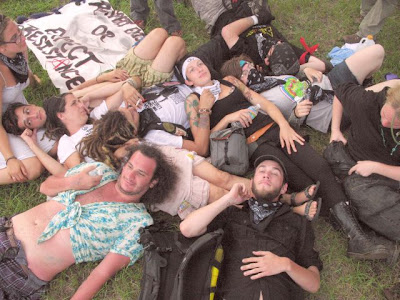