"There was music in the cafes at night
And revolution in the air..."
Bob Dylan, Tangled up in Blue 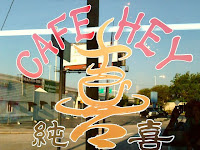 It's a  pearl tucked just north of the Insterstate at 1540 N. Franklin St. A place in a landscape Hopper would have loved to paint at dusk. Every night during the RNC Convention it was busy. Lots of young men and women in dark clothing, looking a little tired, lost and sunburned. It reminded me of Rick's Cafe Americain in Casablanca. Spook types hanging out among the regulars. Neighbors from Romneyville passing time. One tall Georgia boy, a 'street medic' looked lonely, eyes glazed. He wondered in a barely audible soft drawl if Americans would ever be able to speak with each other civilly again. A skinny man in his fifties, gray hair tied into a knot, asks to sit at my table, and began lecturing on peak oil and global warming while I sip my Cafe Americano. I tell him about when I used to wait tables at a place Nixon ate, and he asks me why I did not poison him. "I'm not a killer, Sir". The walls are covered with political art (to be reviewed here soon). Viewers in black moved from one work to the next in a sequential procession, like a serpentine belt in an engine in slow motion.The silvery aluminum tables outside were packed with people, many more are sitting on the sidewalk, their backs to the wall. A couple made out on the concrete in plain view. She had an exotic face belonging on a Goddess rising from the sea...he a taut body and dreadlocks.

Three guys arrived. One stood impatiently behind the guy lecturing on peak oil for some time, until noticed, then all moved to another table. I spoke briefly with a well-known local artist, an older man and his wife. Cafe Hey opened its doors in solidarity and kindness to protesters. In order to feed the hungry, they created a 'special' consisting of a huge bowl of rice, beans, Cuban bread and coffee, all for under four dollars. I sampled one, and it was easily big enough to feed three people. They fed the soul with music, like that of Jun Bustamante, and head with performance artist Vermin Supreme's take on memes. The conversation was the opposite of that ongoing at the RNC Convention. With few exceptions, honest, down to earth and with genuine concern for the world and its future. There was a wave of rumor rippling through about a flash mob near a checkpoint. Some got up an started walking in that direction. Others stayed.

In this Convention, this was where the wild things convened, sought -- and found -- sanctuary.