Jono Vaughan's "Exquisite Self" show at Collective Gallery and Tattoo studio (not parlor). I spoke with two of the principals there and remarked that it didn't look like what comes to mind when thinking "tattoo parlor". They looked at each other, smiling, and replied "Exactly" in unison.

This show is a fusion of two bodies of Vaughan's work: "The Ornamentation of Friends", and "The Ornamental Self", which have been in progress since 2009. He was born in London, in 1977. His Mother was a hairdresser, which might explain some of the work's focus. He came to the US in 1985, completed his BFA at the School of Visual Arts in NY in 1999. He also attended the School of Visual Arts in Savannah, studying under Anthony Palliser. Then a Master's of Arts Degree in Fine Arts from The University of the Arts in Philadelphia in 2002, followed by an MFA from USF in 2009.

He's been teaching since 2000, currently at the Art Intstitute of Tampa, and as a lithographers' assistant at Graphic Studio/USF. 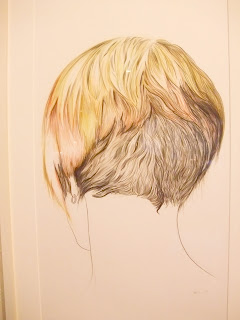 The work in this show consists of detailed drawings of Jono's and his friends styled hair as seen from behind, or about 1/4 views.  The hair in these drawings is masterfully drawn. It does not merely rely on realism, but at times the artist has taken the risks in giving one just enough detail to leave your eye room to fill in the rest as no one else could. On the left, "The Back of My Head, 3/16/08" shows this to perfection. In spite of the apparent lushness of these drawings, there is an astute sensual economy and trust in the viewer's participation in the ideation of these pictures. 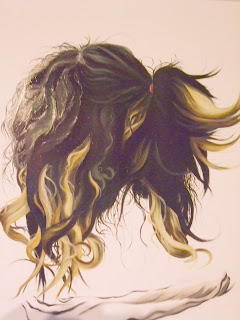 There are questions raised by the work. I note that Jono calls the ones of his friends "The Ornamentation of Friends", and those of himself, "The Ornamental Self". The former seems like an adjunct, the latter far more integrated. Like fashion and body ornamentation, this is a projected, conscious, constructed identity. Without seeing Jono's face, we are seeing several variations of himself. Outside of photographs, hairdos are fleeting. Hair grows out, one changes tastes, etc. We are seeing transitional, living selves here from a POV that is invisible to the depicted subject. On the work on the right, note the delicate formal relationship between the tips at the bottom of the hair to the pattern on the barely visible garment. 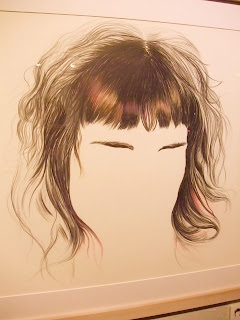 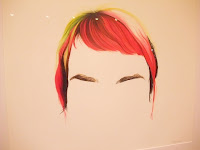 Some are head-on, and likewise faceless, though the eyebrows are included. On the left is "Bangs and Brows, 6/26/09". The faceless identity theme persists. 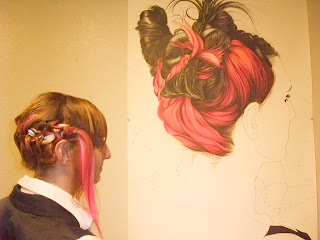 This is a conceptually unusual body of work, expertly executed. Congratulations to Jono Vaughan and to Collective for an interesting show.