The tensions and dialogue between the singlet, one of a kind and multiples in art has been the subject of much critical discourse. It is also the theme of the NCECA show at CEFA, which has a reception at 5:500 tonight. 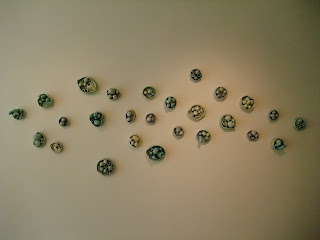 In this work, by Valerie Zimany, titled "Masu-masu no Tenko-mori", 2011 note how the individual larger cells contain smaller ones (just like we do). Each is an individual in relation to the other, but within each, as seen in the close-up below, one can clearly see the individuals clustered within. 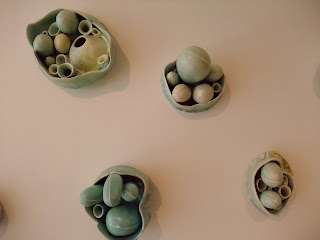 Single? Multiple? At what level of resolution? Or boundary? 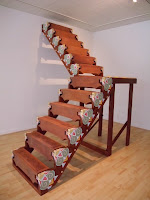 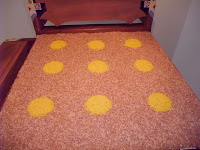 This work, titled "Step by Step", is by Hae Jung Lee (who has other work over at the Convention Center in the Nexpo exhibit). It is a stairway that has a landing, makes a right turn and disappears into the ceiling. It has what seems to be native Korean construction. At the landing and turning point of the stairway what at first glance appears to be a mat is the surface of the landing covered in different kinds of rice, with three sets of three round 5" diameter circles of yellow rice (is this some sort of trigram?). The stairway is impossible to traverse without disturbing the rice. Is it intended to be an obstacle, or sustenance for the upper half? Or both? There's a hint of the journey of the spirit in these stairs.

To see more of her work, see here [Link]. 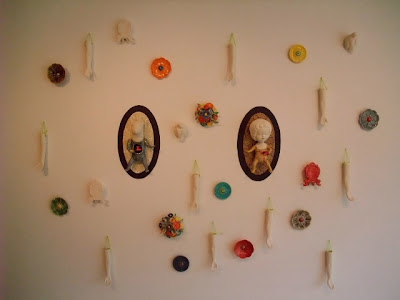 This is a picture of "Confinement", by Debbie Kupinsky. An installation of several milagro-like arms and flowers, with a male and female sculptures of the cute/creepy variety in black oval frames towards the center. 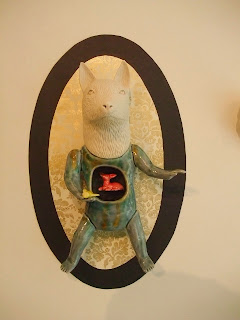 Here is a close-up of the sculpture on the left, a wolf or canid head on a human body. There's a cutaway in his chest, where we can see that inside lies a fawn. The feminine figure, see below, has a Jesus spear type of wound. Around them, milagros hang. A comment on relationships and what it takes to survive over time. 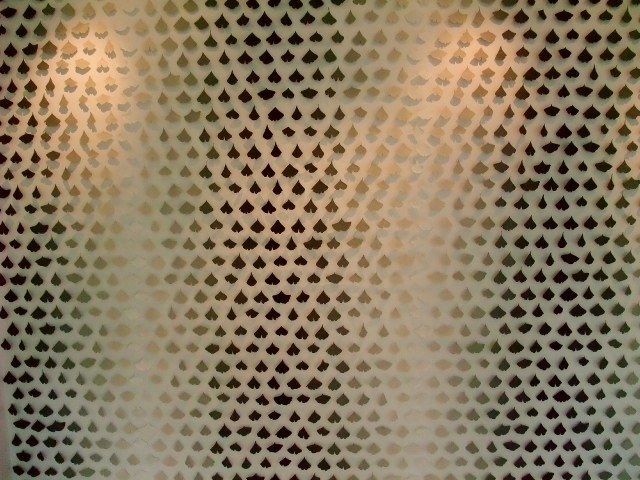 This large piece, "Enduring II" by Michelle Tobuia, is a subtle, beautiful and dangerously decorative, very meditative work. The gradient of tones formed by the beautiful lighting makes this work, as the patterns fade, vanish and re-emerge. 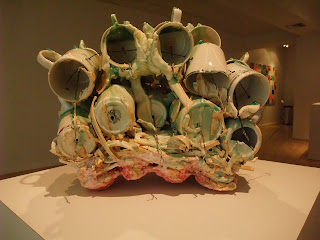 This group of partially fused mugs by Daniel Bare, titled " Re/Claim (Cascade)" again raises the question of the multiple vs the singlet. They're multiple elements in one work. At the base, distinctions come together. 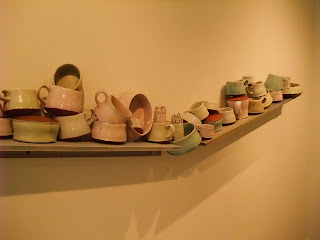 Birdie Boone "All I Wanna Do is Use You"
A shelf overloaded with coffee mugs and bowls appears to have given way, and is in the apparent act of collapsing. I remember this as a another commentary on relationships, where the issue of the individual and the multiple confront each other in our lives.


Kudos to Valerie and Debbie for curating one of the more intellectual shows in the NCECA circuit.
This show, at C.Emerson Fine Arts, 909 Central Avenue St. Petersburg is hosting a reception tonight, starting at 5 PM. 727.898.6060.