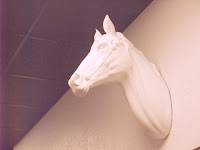 Chris Parks, of Pale Horse Design and Gallery, is a graphic designer and illustrator with an impressive list of clients. He is also a standout fine artist working in various media, most of his work having a strong graphic element. Chris is a friendly, down-to-earth unassuming local figure with a strong, quiet presence and a welcoming smile on his face.


Initially, the title -- and Chris' own description, which reads: "“Saints and Sinners” is a new collection of works by Pale Horse, focused on the dichotomy, duality and conflict between good and evil." leads viewers to think, "Saint? or Sinner?", but soon one realizes that these figures are both, just like the rest of us. The duality, dichotomy and conflict exists in all of us. This body of work goes further. In the portrait-like figurative ones, we see the beginnings of a typology, as in "Worker", the image above. The man is radiating lightning bolts of (creative?) energy from his head, halo-style. He is an illustrated man, his body is covered in tattoos, which some might find riddled with bias and baggage. His T-shirt tells us he perhaps identifies with ice skaters, and the tattoo on his fingers convey a humane message.

On the left, we see a continuation of this budding typology, "Sweet Nurse". Again, another 20-something covered in tattoos, simultaneously Saint and Sinner. The figures are also forcing us to question our own ideas about biases and identity.

On the right, we can see this idea expressed very clearly. The title "Menace to Society" is belied by the sweet disposition and loving look of the pit bull depicted.

This work's title translates to "Catrina's Skull". Is it the personification of Hurricane Katrina? The name, spelled with a "C" is the spanish version. Simultaneously seductive and deadly looking, the duality present in the other works is also here. 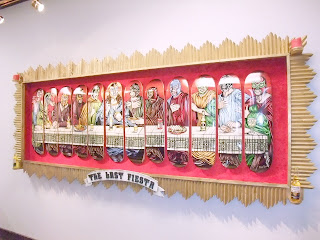 The centerpiece of the show is "The Last Fiesta", a version of Leonardo's Last Supper recontextualized into Mexico, with the Disciples decked out in Lucha Libre Masks, eating tortillas, tacos and chimichangas not bread, all printed on 12 skateboards. Chris told me that on a trip to Mexico, he couldn't help but notice how different styles in Art coexist in the present, and this is where he got the idea. I should also mention that Chris is knowledgeable and fluent in magico-religious symbolism. 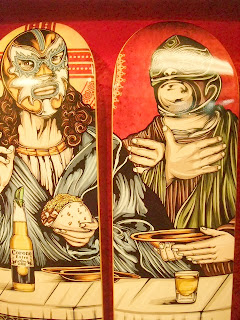 To the left is a close-up showing Jesus and the Apostle to his right in the picture (apologies for the glare, not even a polarizer helped). Note the Lucha Libre masks on both. JC is having a giant taco (no reference to this blog!) and a Corona with the requisite lime. Make no mistake, this is no parody nor satire. It may not have the gravity of the original, but it's there. 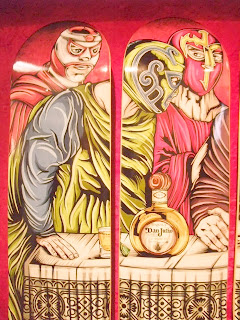 Below, another close-up of the Apostles to the viewer's left of the picture, the first two panels from the left. 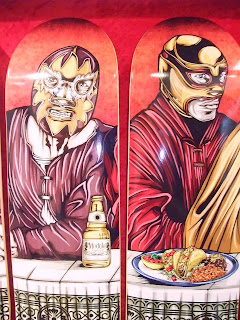 Also below, the third and fourth panel from the left. Note the Mexican food on the table. One detail I noticed, but did not photograph is the footwear of the figures. They're wearing expensive tennies or two-tone patent leather Mexican dress shoes.

Bravo to Chris Parks for this show. As usual, it is first-class , beautifully executed and nothing if not challenging.