The relationship between music and the arts goes back a long time. It can be divided in two camps: Art inspired/motivated/derived/interpreted from music, and art depicting how it's made (musicians at work). This show has both, and some surprises as well. 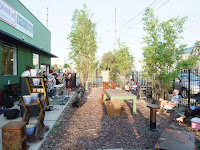 There was live music in the back patio & yard of RDFA.  Three bands played into the evening... Three Pint Harmony...Leigh Humes Band...Renegade Strand. A mellow crowd ringed the space and had a great time. 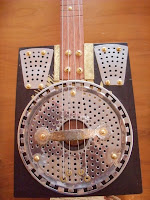 There were several hand-made musical instruments on a table as part of the show. The one on the right is by William Powell, titled "Tabak Resonator". It is a beautifully crafted object. Another view is on the left. 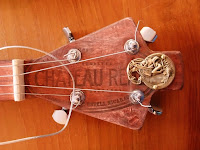 Here's a close-up of another one, showing the craftsmanship involved in making this 4-string instrument. 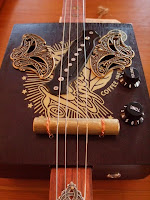 On the right is another instrument by William Powell, titled "Tabak Special".


On the left is Ronnie Boudreaux's "Small Music (sic) Hangar". I'm not sure whether the spelling of it is on purpose or an error. The shards in it and the vibrantly colored frame speak of music.

Nicole Sarikko, "Kokopelli". Kokopelli is an Amerindian (Hopi and Zuni) fertility/agriculture/spirit of music. The Indians depict him with a huge phallus and unborn children on his back, like the belly of a pregnant woman. He distributes babies to moms-to-be. He also consorts with a woman called Kokopellmana. Here, he's abstracted out into a dynamic and beautiful swirl of color across four panels.


On the left is a picture by Clint Thomas, of what appears to be a kid's body holding drum sticks with a stuffed teddy bear's
head superimposed, all in indigo with a whimsical, amused facial gesture. It's more about the spirit of music than a depiction of a musician, in spite of the enigmatic title. 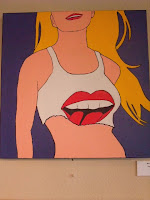 On the right, by Mary Matowsky, "The Groupie". Young, buxom, attractive, carefree, sexually provocative, generic, wearing a tankini with a feminized version of Mick Jagger's Hot Lips, she mocks viewers at one level, while bearing a sensuous smile in the flesh. 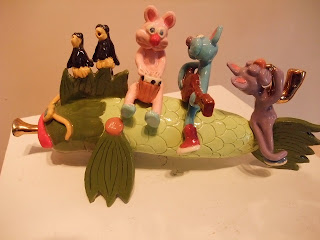 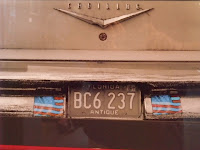 On the right, Patricia Preston Warren's "Hommage to John Prine's So...your flag decal". Here the idea if music is more abstract, in spite of the realism of a photograph. It also puts it in a social context. 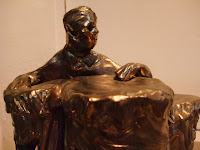 On the left is "Congas", by Charles Axt. This is a close-up of the sculpture, which is about a foot high, showing the details of the figure and his hands upon the skins of the drums. 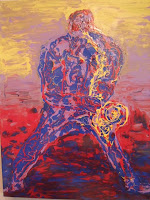 On the right is another work by Charles Axt, "Sax Dreams", in which the sax player is semingly abstracted by his own music. The colors in this acrylic painting are well-integrated with the composition.


On the left is "Wurlitzer 9000" by Sarah Thee Campagna of Cybercraft Robots. [Link]. I watched Frank Strunk III studying this sculpture at length, and did so myself. The 9000 moniker is likely borrowed from 2001: A Space Oddyssey's HAL 9000. There's self-referential redundancy and no small amount of humor in this thing. It has an organ, because it is one. Its "arms" turn valves to regulate/tune itself -- and there are many control wheels to turn. Its eye(s) come out on a stem and it has three legs. It is one feedback-loop machine, much like us humans. same with the tubing, though Wurlitzer 9000's is closed at the bottom end (I think). What this little machine is about is expression, which makes me wonder if it's not in some way a metaphor for the artist. 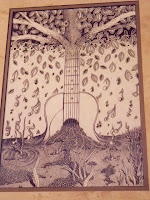 On the left is "Cross-Pollination" by James Grey, an impressive pen-and-ink drawing. Here, the guitar takes on the role of the World Tree, fertilizing itself and everything around it. The details in this work made me wish it had been hung lower so they could be more fully appreciated.


Congratulations to Rob Davidson for hosting and Patricia Preston Warren for curating this show.