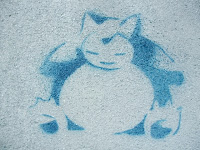 I was tipped off to one of these images by one of the artists, who is a friend of AT.  The rest were unexpected. On the left is a small stencil of a sleepy-looking (manga?) creature looking content. The image is about 7x7 inches. 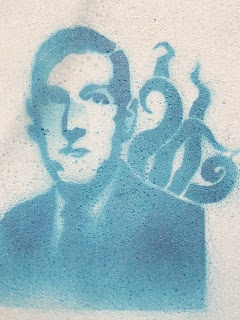 I suspect the one on the right was done by the same artist. It's about 3 feet from the other one, similar in size, and the color seems to be identical. Does anyone know who the man depicted is? 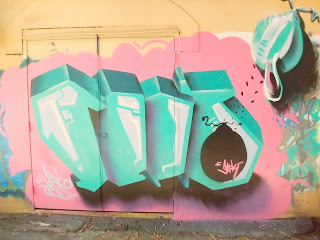 On the left is a larger, multi-colored piece, beautifully executed. Note the double doors over which it is painted. 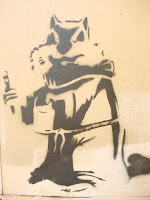 Another small stencil next to the larger work above. Note the expression and what the squirrel (?) is holding. This seems to be a self portrait of the artist, holding brush and bucketful of paint, looking purposeful, alert and industrious. 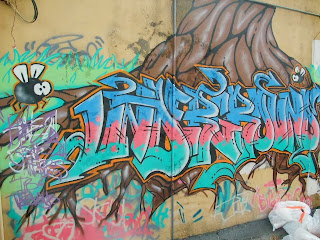 On the right is a painting of a large (world-tree) trunk, like the tree in Avatar, the artist's tag across its roots. 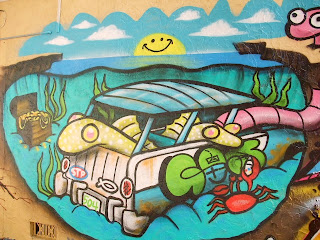 On the left is another painting, a family of sea snakes in their station wagon who have come to Florida for what everyone comes for. Sunny skies, surf, sand, sin, and treasure.  Below is a detail from the above painting. I liked the STP and fish symbols on the car, and the crab tagging the car with the word "Gas", which I suspect may be the artist's own tag.

When I was photographing these images, two things happened. A door opened and a man stepped into the alley. I asked if he worked there, and he said that, no, he owned the building. I was a little worried that he might be unhappy about it, but instead, he waxed eloquently about the work, and how wonderful it was to have it there.
We talked about the famous alley in San Francisco that is full of graffiti, and how wonderful it would be to do something like that here.


Two elderly couples walking by watched as I finished talking with the first man, then continued to photograph. They walked over as I photographed this: 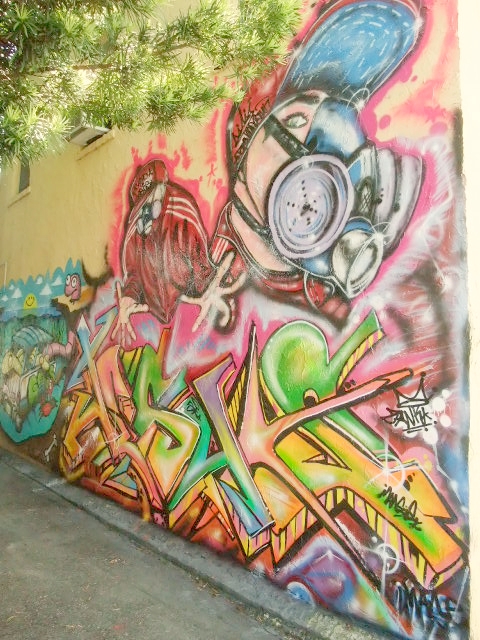 The man waved at the others, and they all came up, mouths agape, marveling at the art. He was in his seventies, and he said "These guys are really good". I agreed, and he proudly said: "We have great street artists back home". "Where is that?" I asked. "Michigan, Detroit in particular. Some of the best in the world". I agreed and took their picture with their cameras in front of the work with the snakes, then the others. We shook hands and bid each other goodbye, the art having brought five people together in an alley for a few moments on a warm morning.
--- Luis
Posted by Luis at 9:13 PM