Art Taco was the first to attend this show. The finishing touches were being put on the signs, a fuse had blown, but everything else was in place. Thursday night AT went back for the NCECA reception. In the back room at SCA the "Episodic, Clustered and Migrating: Valerie Zimany and Daniel Bare" installation takes up the entire space. 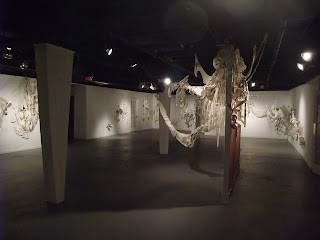 Here is a partial view of the room, giving some idea of the overall feel of the space in relation to the installation, which engages all of the wall space, with some breaks between sections. I spoke with Valerie and Dan at the reception, and was informed that the show is named after the three types of earthquakes. This changed my perception of the show. Images or catastrophic change, the tsunami and ensuing debris were evoked, but the work has a plurality of meanings. 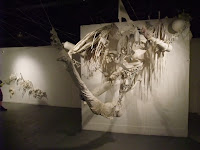 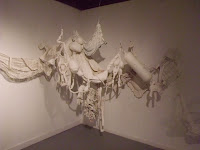 These constructions are made of what the artists call post-consumer objects, meaning everything from boat bumpers to bras, whose stretchability is put to good use here. 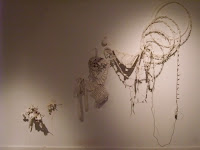 They vary greatly in density. Some, like the one pictured on the left, are airy and almost dainty, others, like the ones above, are heavy, and dense with objects. The objects are covered in eidolon and kaolin. At the end of their utilitarian lives, they are being reincarnated and recombined out of their intended original context into art. Some become fascinating forms that now interact with others. The formal variety here is broad. There are heavy-feeling hanging, sagging stretches, and others, like the one at left, which are ethereal. 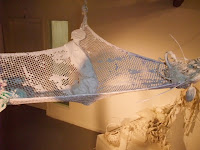 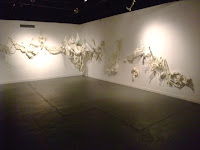 Some of the pieces are dangling from the ceiling, without touching the walls or floor. 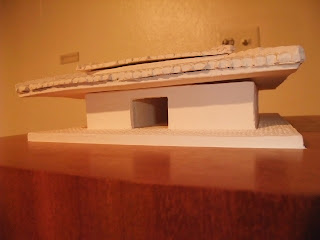 This is one of a series of small sculptures of buildings designed for specific purposes. This is titled "A Chacara (On Memory #1". They are all by Rafael Fonseca. 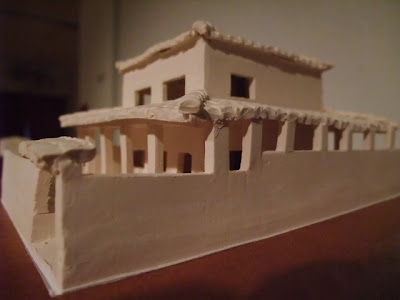 Here's "A Nossa Casa (Memory #3)". The architecture varies culturally and by use. These sculptural maquettes are very detailed, beautiful pieces. Architecture is a significant part of the migrant memory, defining living, working and recreational spaces and possibilities in our lives. With increased mobility come decontextualized memories. Every memory is out of its original time, but as one moves, they also lose their spatial coordinates. 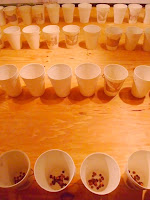 This is one of four works in the front room at SCA by Maria Albornoz.  It is an installation of scores of plastic buckets, each containing a handful of pennies at the bottom. They represent the amounts earned by migrants doing various jobs. 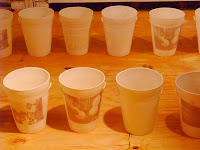 In this picture you can see that each bucket has printed on it a different kind of work (Agricultural, domestic, meat processing, construction, etc. Plus there's writing on there as well, though I couldn't make out what it said. This work confronts ideas of what the  American Dream/Land of opportunity mean, brings up the cliche about foreigners taking over our jobs, and more. I asked an undocumented Mexican once if things were better for him and his family. He said that no, things were just as hard, the work harder, but he knew that his children would have the chance for a different life that they never would have had he and his wife stayed in Mexico. 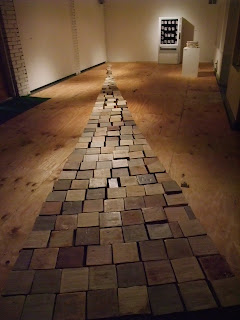 In the foreground, also by Maria Albornoz, is "El Recorrido del Inmigrante" (The road of the Immigrant). Each brick has printed on it immigration forms (aka "El Papeleo". And it ends with a spatial metaphor of them arriving at a corner, perhaps boxed in. 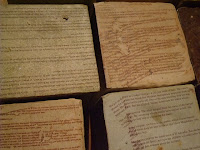 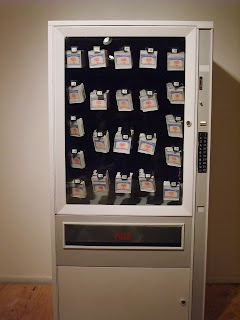 On the left, a detail of the bricks showing the inscriptions. To the right, another Albornoz work, a vending machine that dispenses fake Social Security cards printed on clay. For .75, it was the cheapest artwork one could buy at any NCECA event. This piece, whimsical and sad at the samne time, has the viewer symbolically doing what the undocumenteds have to do at great risk, in real life.  She also had a work that was a tall ceramic stack of forms to fill out for immigrants to stay or become citizens.

Salt Creek Artworks and NCECA have put together one of the most memorable exhibits of the Convention. Treat yourself to this one.