Outsider Art (in the US) is art created by artists who are outside the mainstream art world and its institutions. It has a longer definition than that, of course: [Link].

Sometimes as a blogger, one runs into a bit of mystery....

A few weeks ago, I was at an opening night party talking with other people at around 9 PM when a tall, lumberjack-type blond man (D.P.)  walked up to one of them (K) and greeted her. He listened to us talking about AT, social networks, and other things, and hung with us for a while. As the conversation wound down, he approached me and uttered the magic words: "Want to see some art?". It was an offer I couldn't refuse. D.P. went to put his glass of wine down, and K. said to me that he is an artist who doesn't show and is mostly unknown. I Googled him, and there were only a couple of entries from long ago. One, a stitched panoramic of the interior of his cavernous studio, the other of him working on his cars.

After a brief jaunt, still in St. Petersburg, a heavy gate was unlocked, and we went into D.P.'s huge crib/ studio. It took a minute for my eyes to adjust. A wall full of hanging sculptures revealed itself. To the left, a large gun 'cabinet' inset into the wall, with a long row of sporting guns. The whole place had a kind of not-quite-gothic aura. The works are on the large side, and there's maybe 7-8 of them. In a corner leans a stack of 40's looking pin-ups, but they aren't totally idealized and generic. They're specific-looking women.

I was allowed to take pictures of one work for AT. 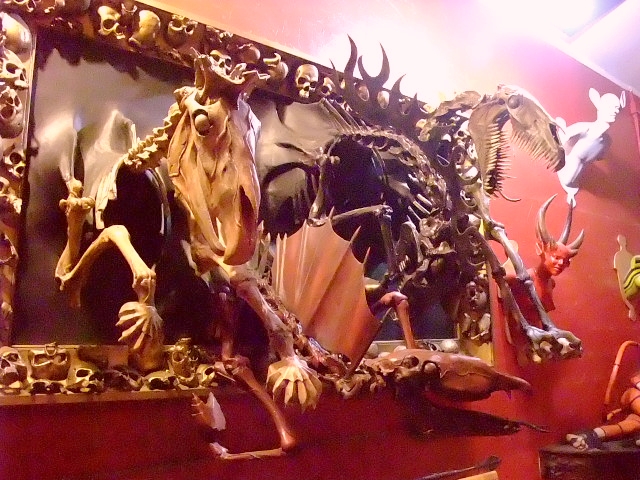 Here's a couple of D.P.'s works. The four apocalyptic horses in the foreground are extremely unusual and impressive. They are made from real horse skeletons (!). The frame, which is ringed with skulls, is large, about 6-7 feet tall by 12-14 ft. wide.  Some of the smaller works have, simultaneously, sexist and feminist connotations.   These works are presently for sale (there's one or two that are presently un-finished, but close to completion). This is eloquent, intriguing, niche work. If you are possibly interested in buying one or more of these works and wish to make contact with the artist, please send your email and/or phone # to me in a comment. They're anonymous and unseen until I approve them, and a message will never be seen in public. I will put you in touch.
Posted by Luis at 8:04 AM