An installation of hand-pulled silkscreens on recycled wooden (plywood?) squares. It's a typology of commonly-faced hurdles. Each "tile" of this sells independently. They are great in small spaces, or one can join several, and in different configurations.


On the right is "Lens", by Sonya McAlister, a bit of glass, acrylic and water cast a beautiful shadow that is the real image/work. Very hypnotic piece that questions the relationship between the tangible and intangible. 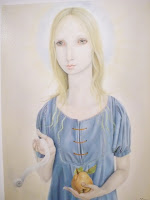 On the right is "Pomona", by Teiji Hayama, one of three paintings by him in the show. All of them are of Goddess figures. Note the halo, and though they are hard to see, there are faint stars in her crown. Pomona is the Roman Goddess of fruit trees, and here she is shown with a pear (I think). Her garment is sky-blue, as are her eyes. She is holding what appears to be a white tube/wire in her right hand. In his artist's statement Teiji says it is our instinct to rail against the truth, to escape, to dream.

On the right is another sacred figure, "Aquarius",  note the tattoo on her shoulder. Below is a close-up of it on seaweed... It's the Shell of Shell Oil & its gas station signs, the Shell that guided the pilgrims on the road to Compostela, the same exact shell that once held you spellbound by its beauty as a child on a now-distant shore, and the same that Botticelli's Venus on the Half-Shell is standing on. She protects, guides and humanizes us. Here she looks on adoringly, & a little worried about the viewer. The clasp by her neck is another shell. She is Venus and Yemanja and all her other avatars, rising from the sea...


Above right, we have Lilaea, daughter of the river Kephisos, the Naiad of the Spring in a town in Central Greece. She holds her hands against her upper chest, as if imploring the viewer. Her look instills hope and faith -- and a sense of duty. The band on her shoulder enjoins us. It reads "Acta non Verba", Latin for "Deeds not Words".  Do something. 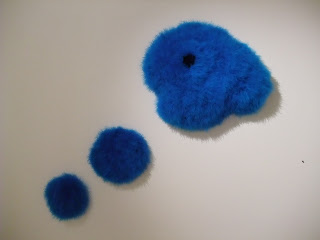 Doreen Horn is a gentle and very intense, focused Artist who goes to extraordinary lengths to actualize her ideas. I had the pleasure of speaking with her at the opening of this show.  This piece, which is, in part, about the moment a dream becomes lucid, was conceived by her as "I wanted something like a cloud".  She looked for a material that would convey this, and chose marabou feathers, which are from a type of stork, and very light, airy and moved by the slightest air currents. These are like thought bubbles, and the black spot in the large one at the top is like the awakening, or a germ of an idea coming into being. It's about 4x5 feet long in all.
At first glance, this looks like a purse with a little needlepoint on it, and to a degree it is that, and a lot more. The purse is open, its hand strap weightlessly floating. Ask yourself, are you awake, or are you dreaming?  There's a figure on its side... 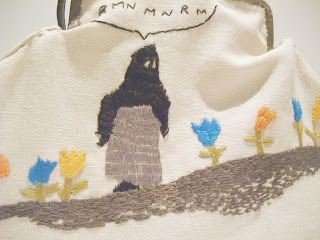 Here's a close-up of the side of the bag. It looks like Death wearing a gray hula skirt, walking in a flower garden, each perched atop its stem and leaves forming a cross. Death ponders which one to take and looking unsure, perhaps even a little sad over the whole thing. Above his figure is a thought bubble in which he can be seen muttering to himself, "RMN MNR, M". Strong work, at the core of the show's theme.
Congratulations to Lori Johns/CEFA for an innovative, well-thought out show.
Posted by Luis at 5:13 PM