A lucid dream is one in which you become aware that you are dreaming. Multidimensional Surrealism, if you will.  As I wrote in another post, one way to train oneself to do this begins with asking yourself the question "Am I awake or dreaming?". That thin line blurs, smoldering into an undulating strand of smoke as one makes their way through this show.


Henry Schreiber is a North Carolina based painter who has a studio on the family farm, where watching marmots cavort is apparently a form of meditation. The artist is no stranger to art history, using and seamlessly fusing techniques and styles from the Flemish Baroque of the early to mid 1600's [Link], [Link],  Romanticism [Link], specifically Delacroix [Link] and Fuseli. All in a period from the 1600's to the mid 1700's. 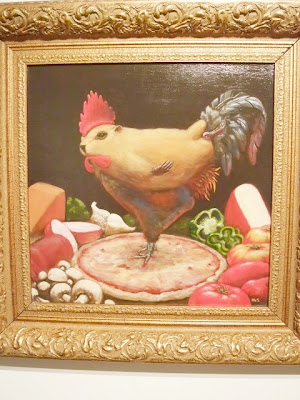 Note the hybrid/surreal Marmot/chicken and how at first it looks plausible. The artist told me the story behind the pizza the creature is standing on. It has to do with late-night pizza orders during college days, specifically the chicken parmesan variety. The vegetables around the pizza are in the style of the opulent table settings in many still-lives from Flemish painting from the 1600's. Here's one example: [Link]. 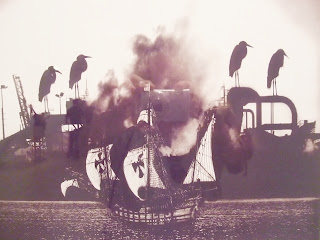 Laszlo Horvath is a Hungarian-born artist working in photography. He has worked as a PJ and a musician. The photo on the right is titiled "Santa Maria in The Port of Tampa". This image is divided into three sections: The birds (egrets?) on top, the industrial plant in the middle, and a replica of one of Columbus' three ships, the Santa Maria on the water. In dreams, water is often a symbol for the subconscious. Here the past (the ship) floats on it, above, the present -- a hellish-looking industrial tangle of pipes and smoke, and lording above it all, Nature.

I had the pleasure of conversing with the erudite and affable Mr. Horvath at length at the reception. We spoke about UFOs while standing before this picture, titled "The Evidence". The saucers, surreally, are upside-down sand dollars. But we get to see them. The only evidence of man (the viewer) is the foreground shadow, who appears to be about to run away. [Link] 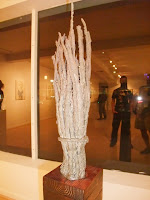 On the right is George Retkes, a Hungarian-born artist, with his work, titled "Seven Years". On the left is a close-up of the top of the sculpture. What looks like a sheaf of wheat are George's dreadlocks of seven years, which he bronzed and made a dark wooden tall base for. He says he had dreams of cutting his hair, and did so when he got through his BA. [Link] 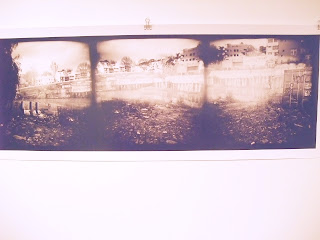 This is one of seven photographs by Lucia Fischer, all "Untitled". There are soft (digitally blurred) dreamy factory interiors, a portrait, and more. This piece is three sequential views of nearly the same thing, but from different points of view. For me, this implied the staccato passage of time in dreams, and the displacements, the multiple levels of awareness in a lucid dream, and the way memory is interwoven with vision. The image looks like a third-eyed version of a stereograph! [Link]