Natura @ West Tampa Center for The Arts Part I 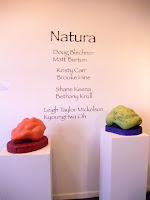 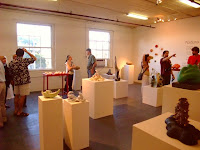 This is the main exhibition space at the WTCA. 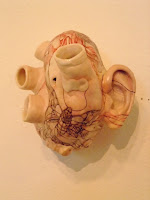 On the left is "Hark", by Lauren Gallaspy It seems like a listening heart, complete with attached human ear. [Link]


On the right is "Boat Builder", by Ted Saupe, who is the head of the ceramics dept at UGA. It's about three feet tall, an archaic looking urn (?). Along the sides are depicted many graphic faces, symbols, initials, colorful marks, all in their own compartments. [Link] (Scroll down some. 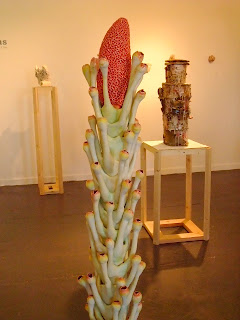 On the left is "LURE (Lupin)", by Leigh Taylor Mickelson, made of C/6 porcelain and mixed media. This is a close-up, a portion about 50% of the total. It looks like an XXXL mountain valley flower, vibrant with life and fertility. [Link] 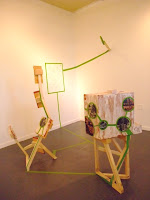 "Parts of a Sum", by Andrew Cho was an intriguing mixed media installation. It had that Rube Goldberg aura with a substrate that made it seem efficient at what (ever) it does. No Site found for this artist. 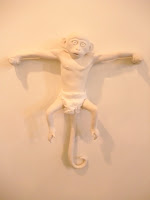 Bethany Krull had several pieces, or more like specimens, in this exhibit. On the left is "Showboat", made of porcelain, and wearing a "modified preemie diaper'. It brings to mind  a not-quite human baby -- in a semi-crucified pose. 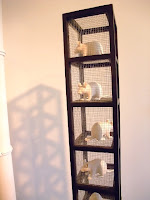 On the right is "Space-Saving Gerbil Tower", also by Ms. Krull. It comes across as a metaphor for high-rises and also there is the sense of a typology here, though the gerbils look very similar. 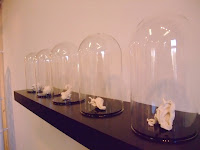 This typology theme was also present in Kristy Carr's five creatures under glass. Like isolated catalogued specimens in formaldehyde, in an academic setting, they await study, dead and isolated from their environment.
[Link] (Scroll down). 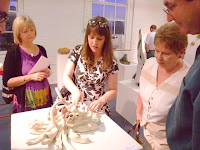 Brooke Hine makes a wide range of ceramics objects, some of which can be seen here: [Link]. Above she is shown talking about her work with gallery goers. A lot of her work is biomorphic, and very conscious of fine surface details/textures/finishes. On the right is "Inflorescence". They're porcelain forms with red spore-like forms growing on them. Life from life. Cycles and transmigration of forms. I showed this large so you can see the fine hairs in those red "berries" some are cat whiskers (gathered after being shed!) and false eyelashes. The fine taper of the whiskers gives them a realistic biological look, as well as an airyness that would  be hard to come by otherwise. In the picture of her talking, in the foreground is another, similar work. I had the pleasure of talking with Ms. Hine. She described how some of these things are created modularly (she showed me by taking one partially apart). Brooke had other works in the show, in the hallway just outside the gallery.

They are also biomorphic, these more human organ-like than abstract. She explained they are based on conversations about people suffering from various medical problems. 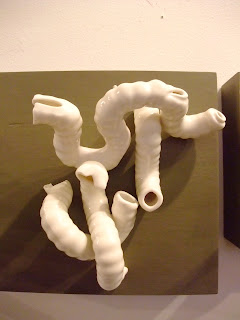 This is very different work from the others shown above. Very serious, austere, excruciatingly clinical. On the right is a close-up of the Duodenum part of the series, to give a better idea of the work. Beautifully conceived and executed.