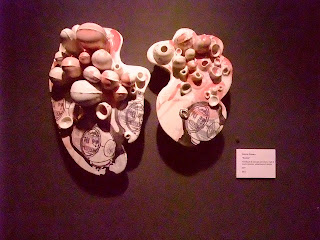 This is "Burble", by Valerie Zimany. Handbuilt and slipcast porcelain, high and low fire glazes and silkscreened decals. There's faces near the bottom of each of the panels. Those shell-like round forms (burbles?) are like thought bubbles or something emanating from the figures. The panels look a little like artists' palettes. Valerie's site: [Link] 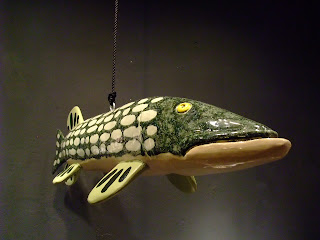 This hyperreal Muskie by Peter Morgan and its companion cutthroat trout have that otherworldly strangely noble look their natural counterparts have, with more than a little of the formal hyperbole of a fishing lure. More here: [Link] 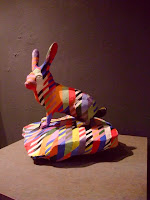 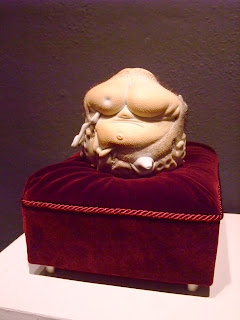 Below is "Riley Rabbit" by Merrie Wright. I've noticed more than a few rabbits (and other animals) in ceramic art lately. This one is striped with colors, looking almost gift-wrapped, as is the base it stands on.

On the left is "Peach", by Jason Briggs. This is one of his grotesque Venuses. I saw another one recently at MSG, similar, but lying down, horizontally on a stainless steel bed and red lace of the same color as this cushion. It was sold by the time I got there. More here: [Link] 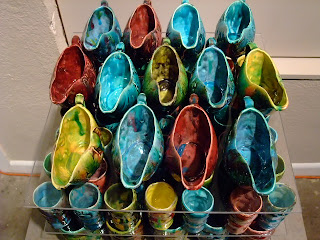 On the right is Craig Clifford's "Stacked", two sizes of earthenware cups and gravy boats (as seen on top) in layers. It looks like a formal progression, but it's the recurring colors that give this work cohesion and strength. More here: [Link] 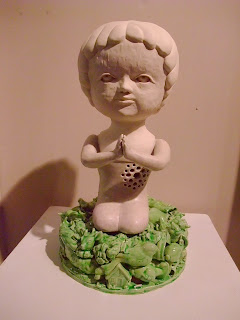 Debbie Kupinsky, "Supplicant". A kneeling figure on a base of small-scale domestic symbols hands together in supplication, asking for something. Over the figure's heart, notice the holes that would be found in an old handset telephone. Is its heart listening, wanting to be heard, or both. See more here: [Link]


A surreal tableaux (with another rabbit!). Note the cup on its side, its content (life?) spilled.More of Myung's work can be seen here: [Link]

Thanks to Rob Davidson for hosting this NCECA show.
Posted by Luis at 10:21 PM